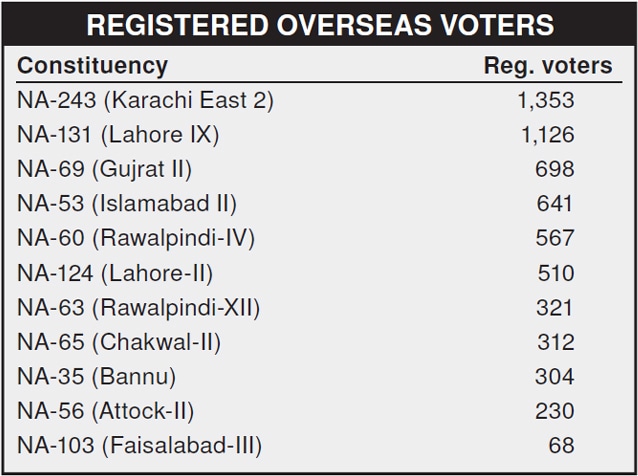 ISLAMABAD: The campaign to register overseas Pakistanis for internet-voting in the upcoming by-polls evoked a lukewarm response, with only 7,419 expatriates out of the total 632,000 registering to avail the facility offered to them for the first time in the country’s electoral history.

The process of registration of overseas Pakistanis from the 37 constituencies where by-elections are to be held on Oct 14 had started on Sept 1 and came to a close on Monday at 9am.

According to a statement released by the Election Commission of Pakistan (ECP), the website for the overseas voters remained functional 24/7 throughout the registration process and did not face any technical problems.

Under the plan, the over 7,400 registered voters will be sent voter pass (password) between Oct 10 and Oct 14 on the email address mentioned in their online application for registration, through which they would be able to cast their votes on election day.

On polling day, the voter shall log in to the website using his username and password and enter the voter pass emailed to him earlier. This will direct the voter to his registered national and provincial assembly constituencies to enable him to cast the vote.

A designated list of candidates of the selected constituency would then be displayed by the system and the voter shall select the election symbol of the candidate to cast his vote. Upon successful submission of the vote, a “confirmation” message would be displayed on the screen.

The ECP had already uploaded on its website separate video tutorials in Urdu and English languages as well as step-by-step help materials to guide voters through the registration and voting process.

An advertisement campaign had been launched through media to create awareness about the facility of internet voting made available for the overseas Pakistanis and the embassies and consulates of Pakistan had also been involved in the campaign.

The complete procedure had been defined by the ECP after being ordered by the Supreme Court to provide internet voting facility to the overseas Pakistanis for the upcoming by-polls. After two major opposition parties criticised ECP for what they called a hasty move, the ECP initially said it was just complying with the court orders. However, it later said that it was not moving in haste and said the political parties should hail the initiative.