Biggest scandal to hit PTI govt: All govt IT projects going to one company according to whistle-blower, company denies wrongdoing

On 15th November 2018, a virtually unknown digital media services company “Brando Marketing” announced on its Facebook page that the company will be “powering government projects” from now as it has been signed as the “Official Digital Media Partner of the Govt of Pakistan”. Further investigation by Daily Pakistan into this claim uncovered a mega scandal potentially worth billions of rupees within the first 100 days of the current government.

Investigations by Daily Pakistan revealed that no tender for “Official Digital Media Partner” was posted by the NITB (National Information Technology Board) nor any due process was conducted before offering such a lucrative partnership to a virtually unknown company in Pakistani IT and digital media industry. So, the question one may ask is, why was such an important opportunity and government business worth billions given for free to this one company?

During our investigations, one whistle-blower, a person close to the PTI since its inception and a part of the current government, agreed to divulge the details behind these murky dealings on the condition of anonymity. According to the whistle-blower, Brando Marketing now handles the official page of PTI Chairman and Prime Minister Imran Khan (they snatched the job from PTI official social media team during NA53 elections and retained the account afterwards, taking it away from the original creators), not only that, according to the source, Brando Marketing has been involved in shady dealings in the past and hopes to involve itself in further shady dealings in the future with big payouts.

Brando Marketing, who has now become the official digital partner of Govt of Pakistan, can potentially be awarded all important and sensitive government projects after signing of this MoU. From managing NADRA database to creating various apps and websites that connect government and its dozens of departments to the people. And the only qualification they needed was proximity to Mr Zulfi Bukhari.

We see the same faces behind Brando Marketing, AOP, and Graana.com – and all are connected to Mr Zulfi Bukhari, whose own appointment as Prime Minister’s Special Assistant on Overseas Pakistanis is contested in Supreme Court. Only yesterday, during the hearing of the case Chief Justice of Pakistan commented that “Nepotism should not be a basis for such appointments” and “On what basis was Zufi Bukhari appointed?” It seems that similar to Mr Bukhari’s own appointment, he is also bringing unknown shady faces along with him and awarding important government contracts to them without any formal process, flaunting all government rules and regulations. Furthermore, Brando Marketing and the faces behind it are also managing the social media presence of the Interior Minister Shehryar Khan Afridi, and allegedly because of this connection was able to put up banners of Graana.com launch all over Islamabad overnight without any approvals.

So, in a way, a single cancer cell once invited into the government, quickly multiplies and tries to take over other organs.

While this mix of virtually unknown, unqualified, and unvetted businessmen have not yet fled with billions of rupees of public money, it is only a matter of time before they do, and while Imran Khan may personally be above suspicion in matters of corruption, these corrupt individuals that he has brought into the government are not coming alone. They are bringing scores of other people along with them who may not be beyond doubt and whose only intention to join the government is to get as much of public money as possible and replace the old corrupt elite as efficiently as possible. If unchecked, these people will bring the PTI government to its knees in no time and maybe not today but soon we will see scandals with billions in not just IT but every government department.

A lot of people, not only the general public, but also old PTI veterans are pinning their hopes on this government. If that shatters due to a few individuals sabotaging the government for their own benefit, faith in democracy may go with it. And then what?

UPDATE: According to Mr Farhan Javed, CEO and spokesperson for Brando Marketing, there was no wrongdoing involved in signing of the MoU between NITB and Brando. Mr Javed stated that Brando Marketing, AOP, and Graana.com are all separate companies and while Graana.com and AOP are paying clients of Brando, they have been providing their services free of cost to Ministry of Overseas Pakistani. In the same vein, the MoU in question does not mention any financial transaction and the company will provide all service free of cost to the NITB. Mr Javed, according to him, manages Imran Khan’s official page since 2016 in his personal capacity, similarly he manages Zulfi Bukhari’s social media presence in his personal capacity.

According to NITB, they have signed similar MoUs with other companies also and the deny any wrongdoing in signing of this particular MoU. 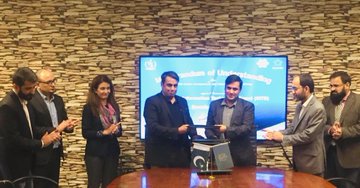 Excited to announce Brando will be powering government initiatives probono! Brando signed a MoU with the NITB becoming Official Digital Partner of Gov of Pakistan. Brando with expertise in mktng will give these services free as part of national responsibility.#Brando

Even if free of cost, the question remains if giving such projects to private companies is in line with policies and procedures laid down by the government departments. As such, all government IT assets are owned by NITB, and even if a company provides services free of cost, there is a lot of windfall profit from such a huge deal in terms of free marketing and access to a huge cache of government data that can potentially be abused by a company.